Girls, tyres and ministers, oh my!

Girls, tyres and ministers, oh my! 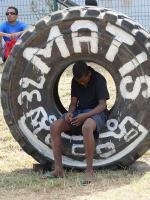 Last Saturday was the tyre-race. Just to be different, I'd decided that this year, I wanted to run with a big tyre, a lorry tyre, one of those huge things that come up to about chest level. I knew the time-keeper for the tyre race, so I talked him into creating a category for me and letting a team of girls run with the big tyres, which has never been done before as only men have attempted this feat in the past. However, we did adapt it just a little: instead of having a team of five girls with five lorry tyres, we kept the five lorry tyres and almost tripled the number of girls running. We ended up with fourteen girls for five tyres, which as it happened was only just enough to get the tyres as far as the finish line.

Recruiting was a bit more hazardous than usual. A team of five is hard enough to come by, never mind a team of ten as initially planned, so we invited friends and friends of friends until we got to ten. One then proceeded to break her toe and sprain her ankle, another managed to slip and hurt herself just before the race. Down to eight. I sent out messages to everyone I could and started asking every girl I met what she would be doing on Saturday afternoon, then one of the runners came up with three friends at the last minute.

Collecting the tyres was also good fun. The last two years, I've been able to fit the five small tyres in my car boot and had proudly carted them about for the week before the race. Unfortunately, only one big (and, to be honest, rather smelly) tyre would fit in the boot, and with a shoe-horn at that, needing at least one strong man to put it in and at least two to get it out again. After various adventures and shifts, we got two tyres down to the stadium and batted our eyelashes at the tyre supplier to obtain (last-minute!) delivery of the remaining three on the day of the race. One of the girls brought plenty of sticks with which to push the tyres, and we were ready. We painted them all with yellow stripes, as another girl had brought a can of yellow spray paint, and went to watch the kids' start to the race, always fun as 800 boys start off at the same time and careen into each other. When we got back, we had precisely one tyre and three sticks left, and several other competitors, backs turned and looking very busy all of a sudden, were standing with ill-gotten yellow-painted sticks and tyres. We rounded them all up, thanking the girl who had brought the spray paint, and went to fetch our t-shirts, of which there were only five instead of the promised ten, as the organiser had forgotten about us. We complained loudly and were informed by the lady at the collection desk that she couldn't do anything, she needed the organiser to be present... organiser who was, naturally, at the finishing line... and we were to be off in ten minutes. He finally arrived with about two minutes to spare, was immediately jumped upon by ten girls in need of Tyre Race t-shirts, and found us five more shirts to run with.

We thought we had our own category, but ended up being lumped in with the other six big tyre groups, which, after the kids, are the attraction of the race as once you've seen the race once or twice, you know what seventy teams of adults pushing small tyres look like. We took 23.28 minutes to complete the 2.5 kilometres with our huge tyres, and didn't even finish last, which we were extremely proud of! This particular tyre-race had an unexpected spectator: Manuel Valls, the French Prime Minister, as well as Najat Vallaud-Belkacem, Minister of Education. They stayed for about two minutes, congratulated the winning girl, took some photos with a few poor children, listened to a performance of the Marseillaise in Mahorese by a local school choir and turned their backs on this once-in-a-lifetime event to make some more promising speeches.

In honour of his coming, a local group called "ton petit Dom" (your little Dom, Dom being both short for the first name Dominique and an acronym for the Département d'Outre-Mer, or French Overseas Department. Mayotte is the youngest overseas department of France) had displayed signs like the ones above all around the island, framing the route that the ministers would be travelling on. In the cursive hand traditionally taught to French children, they say things like:

"Hello Manuel. Mummy wanted to call you, but she's had her bag stolen again. Lots of love, your little Dom."

"Hello Manuel. Daddy didn't have to tidy his shop this morning, there was nothing left. Great, he got home early! Lots of love, your little Dom."

"Hello Manuel. So that Mayotte is nice and clean, could you come and visit us every Saturday? Lots of love, your little Dom."

"Hello Manuel. Here, the bad sharks live in the streets, and I'm scared. Lots of love, your little Dom."

"Hello Manuel. Here, because of the robberies, we live behind bars, but the weather is lovely. Lots of love, your little Dom."

"Hello Manuel. We, the children of Mayotte, can do anything we like, and we're never told off. It's great! Lots of love, your little Dom."

"Hello Manuel. If you see one of our presidents, can you tell him to look after the children in Mayotte? Lots of love, your little Dom."

"Hello Manuel. Can you lend me a bodyguard to go home after school tonight? Lots of love, your little Dom."

"Hello Manuel. If 4 shops and 2 schools are emptied every month, how many offices will be burgled tonight? Lots of love, your little Dom."

The idea behind these was to make the Prime Minister aware of the problems in Mayotte without actually confronting him with anything real, as ministers are fragile little things. As every politician who has visited the island has done so far, Manuel Valls made plenty of promises and waved around the idea of "Mayotte 2025", which is way to far away for most people here to imagine, never mind do anything about. He famously promised 16 new policemen for the island, but went around with no fewer than 110 bodyguards during his stay. As for the Minister of Education, Najat Vallaud-Belkacem decided to implement in Mayotte the same school rhythms which are currently used in mainland France and which have generated a lot of complaining there. Now that's helpful.